Environmental Issues in the Gobi Desert

There are two large environmental threats to the Gobi Desert.  The first, and probably most potent threat would be desertification.
Desertification is a process that turn fertile land and soil into desert areas. It is caused by humans cutting down forests, plants or cutting up the prominent rock in the areas. For clear cutting, there are sometimes chemical added to the soil, but the chemicals can seep in and poison the rest of the soil, killing other plants and animals. Natural factors also contribute to desertification through drought and fire.
To help prevent desertification, a group called Kwon’s Future Forest is creating the “Great Green Wall” in an effort to prevent further spread of the desert. They have planted four million saplings and want to have planted one billion when the project ends. This is called afforestation, and helps restore areas where the land has been degraded by farms or farm animals.
http://www.futureforest.org/eng/page/community/notice_list.asp?page=1&searchStr=&boardSeq=423 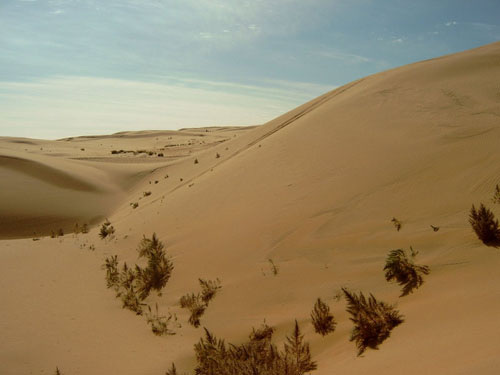 The second threat is the potential mining of the desert.
China and Mongolia are currently trying to get approval to mine the Gobi Desert for gold and copper. This would disrupt the natural ecosystem and harm the soil, plants, animals. It would also displace the people who make the desert their home in order to set up machines and drill. The whole process of getting approval is being kept quiet and away from major media sources because of the fear of opposition and protests.