Common Plants in the Gobi Biome

In order to survive in the Gobi Desert, almost all of the plants have to be adapted to extreme temperatures as well as little to no rain. Many desert plants have adaptations such as taking in carbon dioxide at night instead of the daytime, which is then stored and then used for photosynthesis during the day. This prevents water loss in the daytime, when it is hotter because of the sun. Some structural adaptations of desert plants include: long roots to reach for more water, fewer leaves to conserve water, and many plants are deciduous; in the summer, the leaves make enough food to last through the winter, and during the wintertime, the leaves fall off so that the plant does not have more structures to support with the limited supply of stored nutrients. As well, most have very deep root systems to keep from being uprooted during the wind storm season in the spring. These requirements make it hard for many plants to live in the Gobi, which is the reason why there is considerably less flora there as opposed to elsewhere. 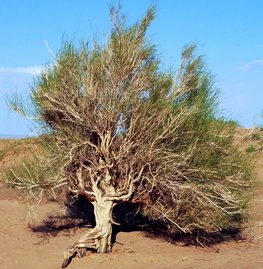 Saxaul tree (Haloxylon ammodendron): This plant has one of the most important niches in the Gobi Desert, as it is one of the only available water sources in the desert. Some of its structural adaptations include the water reserves stored behind the saxual’s bark to keep it from dehydration. As well, the bark itself is spongy and easily absorbs water. This plant is almost leafless, and has very tiny leaves, so that less water is used on them. The system of intricate, long roots of this plant helps prevent sand drifts and soil erosion, keeping soil in place. The roots of this tree can be up to 30 feet deep, and are used in Chinese medicine. Unlike most plants in the Gobi, the saxaul can grow up to 12 feet, and is the only plant that can grow in all the ecoregions of the Gobi, usually on rock outcrops and gravel. It is very useful to animals and nomads traveling in the desert, since water is easily obtained by squeezing the bark, and the wood can be used to build a fire. 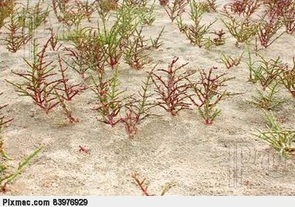 Saltwort (Salsola kali): The habitat of this plant is mainly the Salt Desert region of the Gobi, where many other plants cannot grow due to the high concentrations of salt in the soil. This plant is weed-like, and with its high tolerance to salt, is ideal for growing in the areas with the least amount of plant life. The saltwort blooms from June to August, and adapted to the desert through a taproot system, which helps it gather moisture from earth’s surface while deeper roots stabilize the plant. This plant is very invasive, and when branches become detached, it can form tumbleweed.

Wild Onion (Allium polyrhizum): These plants, commonly called Taana, are a food source for animals and humans travelling in the desert, and is said to taste like hazelnuts. This type of onion likes to grow on rocky, dry areas and is a perennial plant, blossoming in June and July. These plants are said to have medicinal properties, as well as feed winter-starved herds in the spring. Some structural adaptations of this plant include denser and more compact leaves to prevent desiccation, and the onion itself is smaller as well. They also have a grey or brown fibrous outer layer. 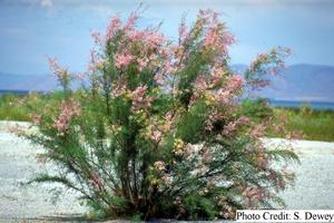 Tamarix shrubs (Tamarix arceuthoides): This small tree is commonly found on riverbanks in the Gobi desert, and grows to be about 4 meters. It is commonly called the salt cedar or tamarisk, and grows in a dense group. In the early summer to the beginning of fall, it blooms, creating small white or pink flowers. Like the saltwort, it is very salt-tolerant, meaning that its main habitats are the salt deserts in the Junggar Basin Region of the Gobi. Its tolerance to extreme conditions has caused it to be a hard to extinguish invasive species in North America. 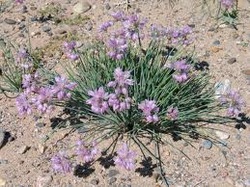 Allium mongolicum in bloom
Perennials and Annuals: These plants only sprout after rain, and last only for a few days, as they do not have adaptations to survive any longer without water. Some specific examples include wild leek (Allium tricoccum), elm (Ulmus pumila), and Allium mongolicum. These plants bloom quickly and produce beautiful flowers which add colour to the Gobi desert. 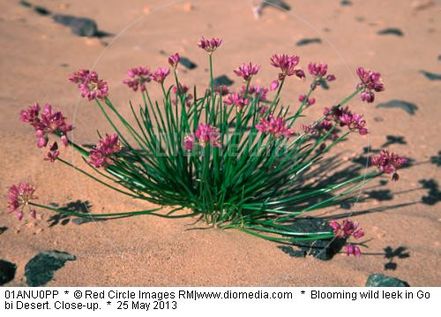 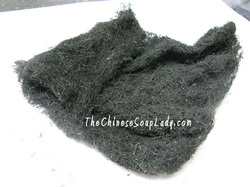 Hair moss (Nostoc flagelliforme): Also known as black moss, hair weed or fat choy, this is a cyanobacterium that is used as vegetable in Chinese food. It has become very expensive as the Chinese government has limited the amount that can be harvested, as it helps prevent sandstorms during the windy season. It is considered a pioneer organism.